High Holidays are referred to as the holidays of Rosh Hashana and Yom Kippur.

The commencement of this two-day holiday is marked by candle-lighting and festive meals including Kiddush at night. During the day, the Shofar is blown during morning services, and all work is forbidden for the two days of Rosh Hashana.

Our conduct and actions on Rosh Hashana determine what fates we will destined for ahead which is why Rosh Hashana is a day of prayer and self-reflection, as well as an opportunity to pray for a good, prosperous, peaceful year ahead. It is also a day of praise of G-d as king of the universe, and as it is believed that the world exists because G-d wills it to, Rosh Hashana is a day when G-d renews his will for the world to continue to exist. It is a day of Remembrance and a day of Judgement, it is day of Shofar Blowing and the Head of the Year.

On Rosh Hashana round Challot are eaten instead of the straditionally braided loaves. They are also dipped in honey instead of salt to indicate our desire for a sweet new year.

Apples dipped in honey are also eaten at the festive meal to continue with the ‘sweet year’ theme. This is also the case for other sweet foods such as Tzimmes and pomegranites which also add abundance to the symbolism.

The head of a fish or ram are eated during the festive meal to symbolise the head of the year.

Bitter, sharp foods are avoided, and on the second night a new fruit is eaten at the festive meal as well (something that has not been eaten since the previous season.)

It is a mitzvah to hear the Shofar on Rosh Hashana, and the morning service is different, requiring a separate book, called a Machzor to be used.

The Torah is read during both morning services. the birth of Isaac is the portion read on the first day and Abraham’s near sacrifice of Isaac is read on the second day.  More on the Torah readings at chabad.org here.

The Rosh Hashana service is much longer and includes prayers which express prayerful wishes for the year ahead, exaltation of G-d’s kingship of the Universe, prayers that G-d remember us for the good and includes Shofar blasts throughout.

Tashlich is also performed on Rosh Hashana. This a prayer that is said by a natural body of water and is symbolic of us throwing our sins into the water.

For a full, in-depth delve into all things Rosh Hashana, check out chabad.org here.

Yom Kippur is the day of Atonement. Whereas on Rosh Hashana we were judged and our fates were decided, on Yom Kippur our fates are sealed.

Yom Kippur is the holiest day of the Jewish year and it is the day when our souls are the closest to G-d. It is a day of immersive spirituality and a day of expression to G-d in gratitude for the blessings that have been bestowed upon us and a prayer that that G-d will accept our repentance, forgive our sins and deliver a positive verdict for our year ahead.

All Jews over the age of Bar/Bat Mitzvah fast for 26 hours on this day. The fast commences at sunset, and concludes one hour after sunset the next day. Commencement is marked by candle lighting.

The day is spend in prayer to G-d with five prayer services that are held in the synagogue; Maariv including Kol Nidrei  on the eve, Shacharit which is the morning prayer and includes the Yitzkor memorial service, Musaf which encompasses the Temple services, Minchah which includes the Book of Jonah and Neilah the ‘closing of the gates’ service which is held at sunset.

The end of Yom Kippur is marked by Shofar blasts at the conclusion of the Neilah prayer and loud cries of the Shema prayer. One final long blast of the Shofar is sounded and “Next year in Jerusalem” is proclaimed. Followed by a festive after-fast meal.

Everyday during the month of Elul, Shabbat excluded, the Shofar is blown as a call to start on our repentance. Rabbi Danny travels the CBD, inner East and surrounds blowing the Shofar to ensure that as many people as possible have the opportunity to hear its blasts.

Many shiurim, talks, lectures, programs and classes are organised for this month to include as many as possible in their path towards repentance and redemption. There is a myriad of learning oportunities for anyone to be found in our busy calendar for the month of Elul. From Lunch ‘n’ Learn sessions to Rabbi Danny’s Online Talks, Rebbetzin Sara-Tova’s classes and mentoring sessions, daily Shofar Blowing and always so much more! 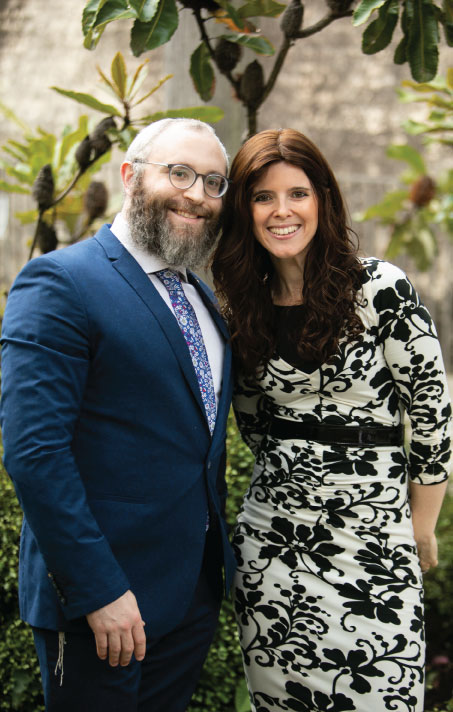